«Biblioteka Imeni Lenina» — station of the Sokolnicheskaya line of the Moscow metro. Located between Okhotny Ryad and Kropotkinskaya stations. It is located in the Tverskoy District of the Central Administrative District of Moscow. It is one of the stations of the four-station interchange hub «Aleksandrovsky Sad — Arbatskaya — Biblioteka Imeni Lenina — Borovitskaya».

Located under Mokhovaya Street, parallel to the complex of buildings of the RSL.

In 1937, a crossing was built to the Ulitsa Kominterna station (now Aleksandrovsky Sad). Thus, the station is one of the first two interchange stations of the Moscow metro. In 1946 the crossing was reconstructed. In 1953, an entrance hall and an escalator passage from the Arbatskaya station were added to it. In 1958, with the reopening of the Kalininskaya station (Aleksandrovsky Sad), the crossings to it were restored. At the end of February 1965, a new passage was opened (designed throughput — 24 thousand passengers per hour) at the Aleksandrovsky Sad and Arbatskaya stations from the constructed bridge in the center of the hall. In April 1965, a new underground ticket office and a complex of underground passages were put into operation, leading to the ticket offices of the Kremlin Palace and the Alexander Garden, while the old eastern lobby was dismantled. In 1986, a common entrance hall with the new Borovitskaya station was built under the western lobby.

In 1991 it was proposed to rename the station to Mokhovaya.

The station got its name from the Russian State Library located here (until 1992 — the V.I.Lenin State Library of the USSR) — the largest library in the country.

Station «Biblioteka Imeni Lenina» on postage stamps of the USSR 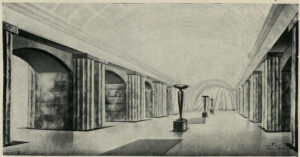