«Park of Culture» is a Moscow metro station on the Sokolnicheskaya line. Connected by a transfer with the station of the same name on the Circle Line. Located in the Khamovniki district (CAD); named after the Gorky Central Park of Culture and Rest. It was opened on May 15, 1935 as part of the first section of the Moscow Metro. Column three-aisle shallow station with one island platform.

It got its name from the Gorky Central Park of Culture and Leisure (the park itself is located on the opposite bank of the Moskva River). Although now the nearest station from the entrance to the park is Oktyabrskaya, in the year the metro was opened, it was Park Kultury that was the closest station to the park. Until the early 1960s, the name of the station was often indicated on the diagrams in full as «Gorky Central Park of Culture and Leisure», later the station was renamed simply «Park Kultury», although it was never officially renamed.

One of the first three terminal stations in the history of the Moscow Metro (along with Sokolniki and Smolenskaya stations).

The project names of the station — «Krymskaya» and «Krymskaya Ploshchad» — are associated with the construction of a new highway planned in the General Plan for the reconstruction of Moscow — «Vostochnaya Ray», which runs from the Palace of Soviets along the Ostozhenka line to the southwestern outskirts of the city and forms at the intersection with the Garden Ring a large area with the working name Crimean. On advertising photographs of the station in 1935, the name «Krymskaya Ploschad» is indicated. Initially, four exits were planned from the station — at all corners of the intersection of the Vostochny Ray with the Garden Ring, but only two pavilions were built at the diagonal corners for the launch of the first line.

In 1991, the station was proposed to be renamed Ostozhenka. 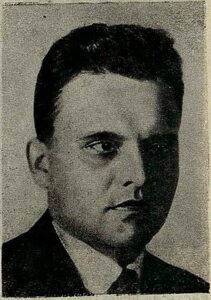 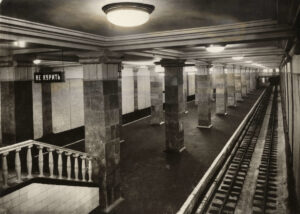 Park Kultury Station architect V.S. Popov(photos have not been preserved)