«Vorobyovy Gory» (until May 12, 1999 «Lenin Gory») — a station of the Moscow metro on the Sokolnicheskaya line, located on the border of the Gagarinsky district (South-West Administrative District), the Khamovniki (CAO) and Ramenki (ZAO) districts; named after the historic district of the same name. It was opened on January 12, 1959 as part of the «Sportivnaya» — «University» section. It was closed for renovation from October 20, 1983 to December 14, 2002. Built according to a unique special project in the lower tier of the Luzhnetsky metro bridge over the Moscow River, it is the first metro station in Russia located on a bridge over the river.

The Leninskie Gory metro station was opened on January 12, 1959 as part of the Sportivnaya — Universitet Sokolnicheskaya Line section, after which the Moscow metro became operational with 55 stations. To reduce the cost of construction, a unique project of laying a metro line along the metro bridge was used, instead of the previously proposed plan for a tunnel under the Moscow River. The station was located on the lower tier of the Luzhnetsky metro bridge (built in 1958), while the upper tier was used for automobile traffic. At the time of opening, the station, 282 meters long and 17.6 meters wide, was the widest and longest in the Moscow metro. The design of the station was simple, in many respects similar to the ground stations of the Filyovskaya line opened at the same time: an asphalt floor, pillars instead of columns, simple ceiling lamps instead of chandeliers, and the main accent was the undulating ceiling of the middle nave. The construction was carried out ahead of schedule, which led to a number of design errors. To save metal and reduce noise, the metal supports were replaced with reinforced concrete, and to prevent concrete from hardening during work in the winter months, sodium nitrate (salt) was added to the mixture, which provoked metal corrosion. Rusting, the reinforcement increased in volume, creating internal pressure in the slabs, which destroyed them and violated the waterproofing. Already on July 8, 1959, due to heavy rainfall, water mixed with mud was flowing into the lobby and trains. In June 1960, from a 4-meter height, duralumin sheets of the cornice began to collapse. Over time, the bridge lost 60% of its bearing capacity, after the start of the destruction of concrete floors on October 20 (according to other sources, 25), the station was closed to passengers, since 1986 trains have been sent along separate bridges on their own supports, built on both sides of the main one, and traffic on the upper tier was stopped later due to the lack of an equivalent bypass highway.

During the years of Perestroika and in the first years after the collapse of the USSR, the lack of funding did not allow reconstruction.

On May 12, 1999, by a decree of the Moscow government, the station was named «Vorobyovy Gory» in connection with the renaming of the Lenin Hills Park into Vorobyovy Gory. This decision was based on the Moscow city law on place names adopted in 1998, according to which “the names of metro stations should correspond as much as possible to the names of land transport, natural, historical, cultural, urban planning and other significant objects of the city”.

The active phase of work on the reconstruction of the station fell on 1999-2002 — the period of construction of the Third Transport Ring, when the Berezhkovsky Bridge was erected, and thus the possibility of a detour appeared. Thus, the restoration took 19 years. In the summer of 2002, train traffic on the bridge was restricted. From July 6 to August 5, 2002, the Sportivnaya — Yugo-Zapadnaya section was completely closed. During this time, the structures of bypass bridges to the main platform of the station were brought up, the tracks were shifted and the station was glazed with double-glazed windows. The station was reopened on December 14, 2002. The station was actually rebuilt, its new length was 270 meters, and its width increased by 3. The new interior was described by the head of the Moscow metro, Dmitry Gaev, as bringing to the «general style of the Moscow metro»: the floor was lined with gray granite, the supports and walls of the approach corridors were faced white and green marble. Compared to the old structure, the new columns have become much thicker, and the places where the arched structures pass through the station hall are closed with wall structures, faced with marble.

In November 2010, an exhibition space was opened at the station — 10 glass rotating showcases with lighting, where exhibits from the collections of the State Darwin Museum, the State Museum of Sports, the Museum of Moscow, the Russian Geographical Society and Roscosmos, large porcelain factories and the State Theater were presented in different years dolls. 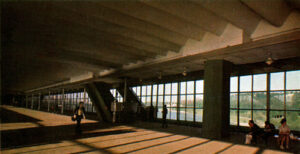