Alma-Atinskaya (Russian: Алма́-Ати́нская) is a southern terminus station of the Zamoskvoretskaya Line of the Moscow Metro. The station was opened on 24 December 2012. 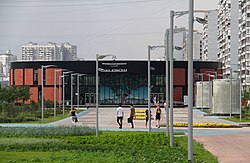 On 29 November 2011 Moscow government decided to rename the station from «Brateyevo» (Russian: Брате́ево) into «Alma-Atinskaya» after the Russian name of the city of Almaty, former capital of Kazakhstan. The change reflects the rename of «Molodyozhnaya» station of Almaty Metro, still under construction in 2012, to Moskva station as a sign of friendship between Russia and Kazakhstan.